Register a free account today to become a member! Once signed in, you'll be able to participate on this site by adding your own topics and posts, as well as connect with other members through your own private inbox!

Users who viewed this discussion (Total:0) 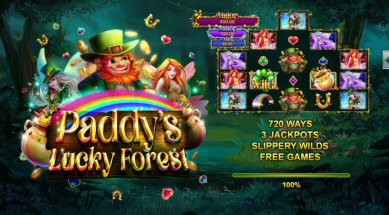 Paddy's Lucky Forest video slot is available at Slotastic Casino and
is powered by RTG software (Real Time Gaming). This game has
5 reels, various rows and 720 ways to win and is available on desktop,
mobile and tablet devices. The reels look different to most of their
other games they are 3-4-5-4-3 from left to right.

This online video slot has an Irish theme and the images are of a
leprechaun, a female leprechaun, a mauve fairy, a red haired fairy,
a pot of gold, which is the scatter symbol, a wild shamrock, which
is the wild symbol, a horseshoe, a rainbow, heart, diamond, club
and spade. 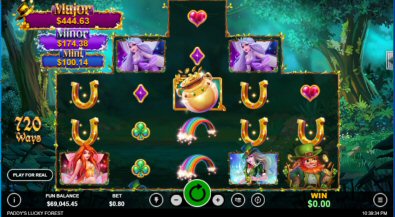 If a wild symbol appears on reels 2, 3 or 4 the slippery wild feature
is triggered. With each new spin the wild symbol moves down
one position until it reaches the bottom and the feature ends. The
feature is available in both the main game and the free spins. Three scatter symbols appearing on reels 2, 3 and 4 triggers the
Pick Bonus feature. Three options will then appear on the screen
and either 15 free spins, an extra pick or instant prizes will be
awarded. The free spins can be retriggered and 10 games will
then be awarded.

Paddy's Lucky Forest has great looking graphics and an unusual
reel set, but I found that I did not win very much and it took a long
time to trigger the Pick Bonus. Unfortunately I just won an instant
prize and not the free spins. Another video slot that you may like
to try is Mardi Gras Magic.

New players at Slotastic Casino are eligible for a 150% bonus on your
first deposit. Redeem Coupon Code: WINTASTIC.